The valleys of south Morocco are stunningly beautiful, with mountainous terrain slowly giving way to the vast expanse of the Sahara.

Our 3 day Morocco sahara tours show you the treasures of North Africa, from the imposing Atlas Mountains to the shifting sands of the Sahara. You’ll stay in a traditional Berber camp and experience what it’s like to ride a camel in the dry heat of the desert, as well as witnessing one of nature’s most stunning sights: a desert sunrise.

Our journey starts at 7 a.m. from Marrakech to Dades Gorges across the Tizi-n-Tichka Atlas pass with its far-reaching views across the mountains, over to the traditional Berber village of Telouet. We’ll then continue to visit the UNESCO World Heritage Site of Ait Benhaddou, a spectacular fortified village (known as a ksour in the Maghreb). You’ll be able to have your lunch at Ait Benhaddou or Ouarzazate and we’ll then continue to Dades Valley where we’ll then spend the night in a riad/hotel.

After breakfast, we’ll drive from Dades Valley to Todra gorges where we’ll get the chance for a short walk between the palm groves, then we’ll get back to the road and head off to the desert of Merzouga. We’ll then pass through traditional Berber villages until we reach Tinjdad, Jorf, and Erfoud, where we’ll start to see the beginning of the Saharan oasis of Tafilalet.

At Merzouga we’ll find camels waiting to take us on an adventure through the golden dunes. We will spend the night in a well-equipped camp with traditional Berber drum music in the middle of the Sahara. You’ll be able to watch the desert sunset, and spend the night under the crystal clear stars in one of the nomad tents.

Day 3: Merzouga to the Draa Valley and Marrakech

We recommend getting up early to see the sunrise on the third day. The sunrise in the desert is an explosion of colour, from deep reds to bright yellows and oranges, with shadows dancing around the dunes.

After watching the sunrise we’ll ride the camels back to Merzouga for breakfast and to freshen up with a shower. We then start our journey back to Marrakech through the Berber villages of Alnif, Tazarine, and N’kob where we stop for a traditional Berber lunch. We’ll then head through Draa valley until we get to Ouarzazate for a quick break, before continuing to Marrakech via Tichka-pass. 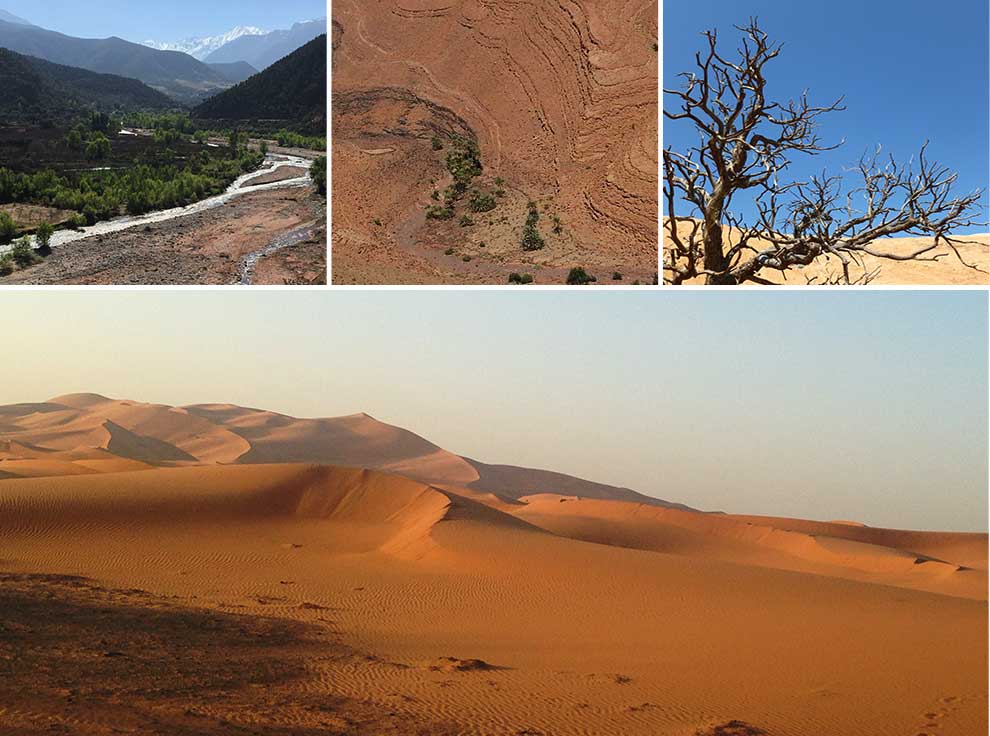 Pick up and drop off:

Explore the Valleys of
Morocco. Get in touch
with us today!

We offer reductions of tour price for children under 12, please check our booking terms for more information.

What should I bring?

Magical Marrakech and The Berber Lifestyle

A Taste of Morccan Desert

The Valleys of South Morocco

Surf and South Morocco from Agadir

Read more
November 28, 2016
0
Book Your Holiday Today!
We use cookies to ensure that we give you the best experience on our website. If you continue to use this site we will assume that you are happy with it.OkRead more